Hybristophilia: Why So Many Women Fell In Love With Richard Ramirez

Hybristophilia: Why So Many Women Fell In Love With Richard Ramirez
210
SHARES
ShareTweet
Subscribe

Serial killer Richard ‘The Night Stalker’ Ramirez terrorized Los Angeles and San Francisco in the mid-1980s. Ramirez used a .22 revolver, knives, machetes, tire irons, and hammers to bludgeon his victims to death – often after sexually assaulting them. He also scrawled Satanic messages on the walls of the blood-splattered crime scenes.

In his own sinister words, he revealed, “I love to kill people. I love to watch them die. I would shoot them in the head and they would squirm all over the place, and then just stop. Or I would cut them with a knife and watch their faces turn white. I love all that blood.”

WATCH THE VIDEO OR SCROLL DOWN TO READ THE FULL ARTICLE

In 1989, following a nationwide manhunt, he was finally captured. The trial of The Night Stalker cost Los Angeles County approx. $1.8 million. More than 1,600 potential jurors had to be interviewed to find a panel that was impartial about Ramirez.

Despite his list of convictions, amounting to 13 counts of murder, 5 counts of attempted murder, 11 counts of sexual assault, and 14 counts of burglary; he still managed to attract hoards of female admirers. “Female groupies” watched Ramirez as he played to the courtroom – waving and smiling from behind dark sunglasses.

Alan Yochelson, former District Attorney of Los Angeles County, recalls this disturbing phenomenon. He said, “(Ramirez) loved the attention. At this point, the women started showing up – the so-called ‘groupies’ – who would come to court and want to see Ramirez. (They) were rooting for him.”

Throughout the trial, graphic evidence of violent attacks on women was presented to the jury panel. Yet one juror, Cindy Haden, had started to fall in love with the serial killer, and on Valentine’s Day, she gifted him a cupcake with the message “I Love You”. Shortly after, she was dismissed from jury duty.

Following his death penalty sentencing, Haden continued to visit Ramirez behind bars – eventually introducing him to her parents. Later, she defended Ramirez during her talk show appearances calling him a “caring guy”. However, for Haden, she was just another face in a long queue of female admirers obsessed with the devout Satanist.

According to the San Francisco Gate, during his 23-years on death row, he received bags of mail – mostly from women. “Our high notoriety inmates get the most interest,” said Lt. Sam Robinson, a San Quentin spokesman. “I have tried to figure this out, but I don’t have an answer.”

One admirer, who remains anonymous, also said of Ramirez, “He is good looking and I loved his big hands. The thrill of danger of going up to a state penitentiary made it all worth it because to me it was like a dream come true to face one of the world’s most feared men.” Adding, “Like my mom used to say, you can love someone but you don’t have to like them.” 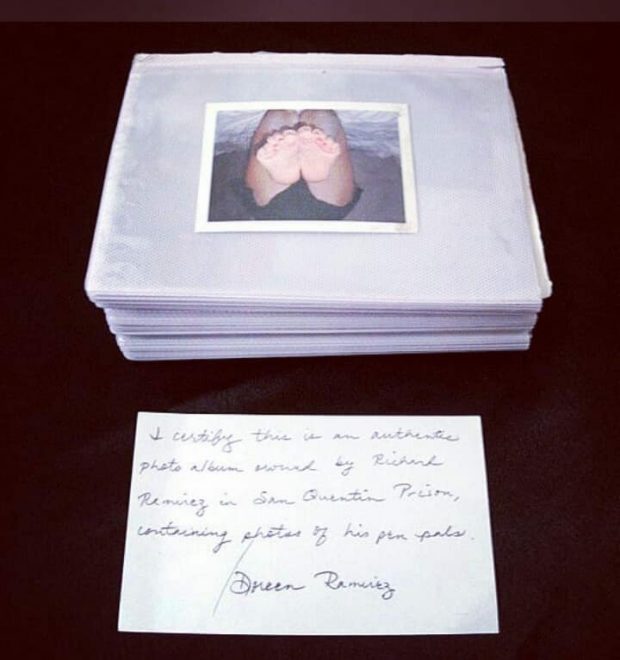 Even more disturbingly, is hoards of women would send Ramirez (who was very public about his foot fetish), photos of their feet for him to fantasize over.

Becoming infatuated with someone who has committed a serious crime, such as sexual assault or murder, is known as ‘Hybristophilia’. This is one of the reasons behind the thousands of letters sent to serial killers from their admirers each year.

The letter-writing organization Human Writes hooks up members with inmates on Death Row in the USA. Founded in 2000, the annual member’s subscription is currently $30 and more than 1,500 members use the service.

The organization also offers counseling sessions for those who have befriended an inmate scheduled for execution. Their website reads: “Typically, your co-ordinator would be in touch with you several times before the date and would try to be available to you on the evening of an execution.”

In popular culture, hybristophilia is also known as ‘Bonnie and Clyde Syndrome’. According to those who have fallen for the ‘bad guy’, it’s a powerful concoction of restlessness, lust, fear, boredom, and possibly love.

Professor of forensic psychology Katherine Ramsland reveals that women who have dated serial killers do so for the following possible reasons:

Criminologist Jack Levin, the author of ‘Extreme Killing: Understanding Serial and Mass Murder’, writes: “They love the celebrity status. These are the same women who might correspond with a rock star or a rap artist.”

Then there is also this distorted idea of the “perfect boyfriend”. To a woman who suffered an abusive relationship in the past, a man behind bars makes for an ideal partner. She knows where he is at all times and she believes he is thinking of her.

While she can claim someone loves her, she does not have to endure the day-to-day issues involved in most relationships. There’s no laundry to do, no cooking for him, and no accountability to him. So she can keep the fantasy charged up for a long time.

Sheila Isenberg, author of ‘Women Who Love Men Who Kill’, explained, “If the guys behind bars, it’s always exciting.” Adding, “It’s easier to get a date or get attention from (serial killers) than, say, Brad Pitt. Pitt is going to ignore your letter, he’s not going to boast about your letter but this guy is. He’s probably reading his letters and responding to them because it puffs him up and raises his status in his own eyes.”

The Marriage of Richard Ramirez and Doreen Lioy

In 1985, Doreen Lioy, a freelance teen magazine editor from San Rafael, also became obsessed with Ramirez. Over three years, she wrote 75 letters before he finally agreed to meet in person at San Quentin Prison.

Speaking to The L.A. Times, Doreen recalls, “When we finally touched it was one of those defining moments. He is very tall (6 feet, 1 inch) and very thin, and I sort of fell into his arms softly and, yes, gently.”

She added, “This is a feeling that began for me as long ago as the night before he was arrested and police broke into the television show I was watching to broadcast his picture. Looking back, I see it was a turning point for me. They showed his mug shot in the middle of ‘Dallas’ and I saw something in his eyes. Something that captivated me. It wasn’t as if I knew him. But there was something in his eyes… maybe the vulnerability, I don’t really know.” Ramirez proposed three years after.

On October 3rd, 1996, while Ramirez was on death row, they were married. Doreen bought a gold wedding band for herself and platinum for Ramirez as he explained, “Satanists don’t wear gold.”

None of Doreen’s family attended the small service at the prison. She explained, “Because of my love for Richard, I have given up family, home, employment, and my friends. And people say, ‘Why?’ Obviously, it’s not to write about it or to sell a book. Clearly, if I was interested in something literary, it would’ve turned into something 10 years ago.”

“I always knew this would require a tremendous personal sacrifice. But I have never looked back. I understand others’ disbelief. I understand their confusion. But from that day in July 1988, when he just looked at me and said, ‘I wish to marry you,’ I have known in my heart that this was the right thing to do.”

Despite Doreen stating that she would commit suicide when Ramirez was executed, they eventually separated as damning new evidence matched him to the murder of 9-year-old Mei Leung. On April 10th, 1984, he raped and beat the girl before stabbing her to death, and hanged her body from a pipe in the basement of a hotel in the Tenderloin district of San Francisco. In 2009, Ramirez’s DNA matched to a sample obtained at this horrific crime scene.

On June 7th, 2013, Ramirez died of complications from B-cell lymphoma, a cancer of the lymphatic system. He was 53-years-old. At the time of his death, he was engaged to 23-year-old Christine Lee.