On October 12th, 1978, police were called to Room 100 at the Chelsea Hotel in New York City; there they found 20-year-old Nancy Spungen unresponsive on the bathroom floor, her body slumped under the sink with a single stab wound to the abdomen.

Investigators instantly pinned the blame on her boyfriend, Sex Pistols’ bassist Sid Vicious, who was believed to have owned the “007” hunting knife, responsible for the wound that killed Nancy. The official statement read: “We have no doubt about the murderer. We have the figurative smoking gun.”

Sid Vicious (real name John Simon Ritchie) plead not guilty. Four months after he was released on bail, the London-born punk rocker died of a heroin overdose at 21-years-old. With the main suspect no longer able to stand trial, the case was closed by the NYPD leaving many unanswered questions almost 40 years on…

At age 17-years-old, Nancy Spungen moved from Philadelphia, Pennsylvania, to New York City. She fled home after her schizophrenia diagnosis led to a suicide attempt – slitting her wrists with scissors.

New York City was going to fix everything for the teenager but she could not run from her violent temper tantrums. She supported herself by stripping in late-night clubs and turning to prostitution.

Nancy willingly threw herself into the rock lifestyle; late nights, loud music, wild men, fast women, and an endless flow of drugs. She became a familiar face on the punk rock scene before finally attaching herself to Sex Pistols’ bassist, Sid Vicious.

Sid and Nancy wasted no time moving in together. The volatile couple were heroin addicts prone to attacking each other violently in public. The union became known as the ‘Romeo and Juliet of Punk Rock’ as they both headed full-speed towards a morbid end. 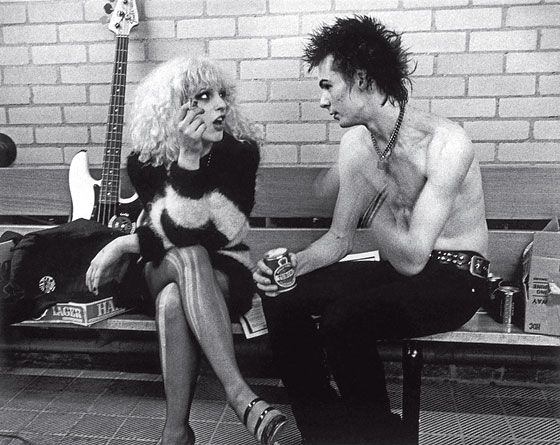 DJ Don Letts recalled, “The last time I saw them Sid has got this (long) knife and he sort of sticks Nancy with it, just gently, but you know she’s like, ‘Ow, Sid that hurt.’ So I was like, ‘Sid be careful, someone’s going to get hurt.'”

Sturgis Nikidis, a former resident at the Chelsea Hotel and neighbor of Sid and Nancy, explained, “If you have ever been a heroin addict and you have a girlfriend who is also a heroin addict, it’s hard for most people to understand the dynamic, it doesn’t matter how much you love somebody, that all goes out the window when there are drugs involved.”

Sid did often show his softer side and his admiration for his destructive girlfriend. In a notepad, he wrote an essay titled: “What Makes Nancy So Great, by Sidney” that included her “fab taste in clothes” and “sexy feet.” The punk rocker also highlighted her “great sense of humor” and the that she’s “a great hustler.”

Alan G. Parker – author, filmmaker, and close friend of Vicious – released the documentary ‘Who Killed Nancy?’ that re-examines the death of Nancy.

Parker explained, “I just wanted to clear his name. Of course, I wasn’t there, I can’t swear on the bible he didn’t do it, but people involved have always told me to keep digging, keep digging and when you do dig it just does not add up.”

In his documentary, new evidence clearly points towards the innocence of Vicious. Including:

John Holmstrom, the former editor of Punk magazine (1976 – 1979), said, “This is like a nightmare. This is like right out of a Twilight Zone episode; you wake up, there’s a knife, a pool of blood and your girlfriend is in the bathroom – stabbed to death. Anybody is going to think, ‘What did I do last night?'”

Photographer Peter “Kodick” Gravelle added, “It was too easy just to blame Sid and not follow the case. I mean it’s amazing when we think back now that the case wasn’t followed up more so. Everybody just assumed that he was guilty.”

Many close to the couple speculated that Nancy had stabbed herself. Alongside suffering from schizophrenia and struggling with a heroin addiction – suicide attempts were a regular occurrence in her life.

If this theory is true, it could explain the stolen money might have been taken by an opportunist who entered the hotel room only to find Nancy in a pool of her own blood and Sid unconscious in the corner.

Who did kill Nancy? This is a question that remains unanswered leaving only speculation and confusion surrounding Punk Rock’s most talked about murder mystery.