For more than 20 years, the ‘Grim Sleeper’ stalked women on the streets of South Central Los Angeles; killing at least 10 young African-American women between 1985 and 2007.

As they walked home from parties or work late at night, the serial killer launched his vicious attack – smashing their heads with rocks or wrapping his hands around their neck. Sometimes he threatened them with a gun before raping and killing the victim then dumping the body in an alleyway. 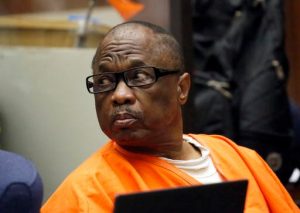 He was nicknamed the ‘Grim Sleeper’ because he was dormant for 14 years before resuming his killing spree. Members of the local community complained that police were not investigating the string of murders because the victims were poor and black and many were drug users and prostitutes.

Finally, in 2010, DNA evidence tied Lonnie Franklin to those killings and he also became a suspect in multiple other murders with the real victim count believed to be between 25 to 100 women. In 2016 – 31 years after the death of his first confirmed victim, 29-year-old Debra Jackson – he was sentenced to death.

Then on March 28th, 2020, he was found unresponsive in his cell at San Quentin State Prison and pronounced dead. These are the most disturbing facts about the twisted crimes of the ‘Grim Sleeper’.

Franklin lived on 81st Street on Western Avenue in South Central Los Angeles, one of the poorest and most rundown parts of town. Despite the poor conditions, Franklin was known as ‘the good neighbor’ who everyone could turn to whether it was to borrow money, buy you a meal or fix your car out on the street. Described as “friendly and quiet”, he always had time for a chat and knew the neighborhood well as he’d lived in the same house since childhood.

Then on July 7th, 2010, everything changed as police raided his house and arrested Franklin on 10 counts of murder and one count of attempted murder. A neighbor and close friend of Franklin’s revealed to documentary-maker Nick Broomfield that he believed in his innocence.

“It’s hard for me to believe because of the way that he would raise his kids and his grandkids. He had his son learning how to drive at the age of 9-years-old. He taught him how to drive well and how to do mechanic,” he said. “If a man has value of a life like that – how can you just take lives?”

5. Women Were Not Warned There Was An Active Serial Murderer In The Area

In 1985, Margaret Prescod founded The Black Coalition Fighting Back Serial Murderers and handed out leaflets about the killings in the area more than 25 years before Franklin was finally arrested. No women who lived in the local area where the victims were killed had been warned by the authorities of the serial murders.

Prescod said, “Before the arrest of Lonnie Franklin was made, we were actually out in his neighborhood leafleting around there and the interesting thing about it is that it was shocking how many people who lived in the neighborhood knew nothing about any serial murders. They just didn’t know. How is this possible? To have that number of people – these women killed – and people who live happily around the corner don’t know anything about it.”

4. He Kept Photos Of His Victims As Trophies In His Home

More than 180 photographs and hours of video footage recovered from Franklin’s home makes for a haunting collection belonging to the serial killer. In some photos, the victims are captured smiling, some they are sleeping and disturbingly in some – they may be dead.

Detective Dennis Kilcoyne of the LAPD Homicide Unit said, “They (all) interacted with Lonnie Franklin at some point in their life. Every one of these photos is going to be another story in the life and times of Lonnie Franklin.” Adding, “We searched every nook and cranny of his residence and the big commercial building he had in the backyard; we gathered cameras, videos and (evidence) from all of the property. There are decades of photography from this guy because he was obviously the cameraman.”

When the LAPD released the photos on their online database they received more than a million hits in just a few hours. Los Angeles Police Chief Charlie Beck told reporters, “We certainly don’t believe we are so lucky or so good as to know all of his victims. We need the public’s help.” The investigation is still ongoing.

3. He Selected Victims He Believed Nobody Would Care About

Franklin picked victims who were drug users and prostitutes as he believed they were less likely to be reported missing – if ever reported missing at all. He was also known to joke with his close neighbors about “killing crackheads” and “cleaning up the streets.”

The victims ranged in age from 14 to 46 and were either shot or strangled. Franklin would use the same .25 caliber gun in a total of nine attacks.

The mother of a 25-year-old victim, Janecia Peters, said, “I don’t think the pain of ever losing a child goes away. It’s just there – no matter what you do, how well you’re doing – it’s just sitting right there, like ‘Janecia is not here.”

Franklin was nicknamed ‘Grim Sleeper’ by journalists as it was originally thought he took a 14-year hiatus between killings. But was he really ‘sleeping’ during his hiatus? Kilcoyne has a different theory, he said, “I don’t believe for a minute he was quiet. He lived in the same house all those years and I don’t think Lonnie Franklin ever changed his stripes – I think he was the same man he’s always been.”

Now, police believe there were many more victims and that they could be buried in the landfills as Franklin spent years driving a garbage truck.

2. The DNA Evidence Caused A Lot Of Controversies

The DNA evidence that led investigators to Franklin wasn’t, in fact, his DNA – it belonged to his son after a 2008 arrest for firearm and drug offenses. California Attorney General Jerry Brown explained, “It’s called familial DNA because it is the DNA not of the ultimate suspect but of a very, very close relative.”

DNA is processed from the crime scenes and then forensics looks for a match in the state’s DNA database. In California, anyone arrested for a felony must give a DNA sample regardless if they are charged with the crime or convicted.

Police were then able to narrow down a list of relatives as suspects and eventually zeroed in on Franklin. However, authorities did not have a DNA sample for Franklin so they placed him under surveillance until they got one. The suspected serial killer had a meal in a pizza diner and unbeknownst to him; the leftovers, fork, and napkin were collected as evidence for DNA testing by a detective posing as a busboy.

It was the first time in history that familial DNA had ever been used to solve a murder case. Under the policy, familial DNA is only to be used as a “last resort” when all other investigative angles have been exhausted. Familial DNA has caused controversy as it has been previously argued that the method invades privacy rights and is racially discriminatory because African Americans and Latinos are disproportionately represented in DNA databases.

Investigators also recovered a gun used in one of the killings and photos of victims in Franklin’s house after his arrest.

1. He Took His Secrets To The Grave

On June 6th, 2016, Franklin was charged with ten murders and one attempted murder and a Los Angeles County jury sentenced him to death. Although Franklin had received the death penalty, California hasn’t executed anyone since 2006, under then-Governor Arnold Schwarzenegger. Inmates, therefore, are far more likely to die of old age.

Even behind bars, the investigation into the identities of the women in the photos continued. In 2010, Dennis Kilcoyne said, “Time is on our side now because Franklin is sitting in jail and he’s not going to hurt anybody so we’ve got all the time in the world to put the names to these faces now.”

Unfortunately, ten years later, that time had run out and Franklin died behind bars at the age of 67-years-old – taking many of his secrets to the grave with him.

The stepmother of a victim named Barbara Ware told People magazine, “I won’t say I’m pleased he died but at the end there was justice for all the bad things he did in his life.” She added, “We can now be at peace.”

Despite overwhelming evidence, Franklin still claimed he was innocent until the very end so the families of many of the victims may never know the truth.

⚠️ NEW QUIZ ALERT ⚠️ Check it out at CRIME

Who else is watching? #jeffreyepstein #netflixdocu

Honestly haven’t been the same since finding out

Ted Bundy leaving the courtroom with his Beer Box

Hands up if you’re number 2! #murderdocumentari

Full article over at CrimeViral.com [ link in bio

Beware of those who fall under Gemini, Virgo, Pis

Sorry guys, Ted ruined it for you! #donttalktostr